As part of Toyota’s annual team briefing, Shine Interactive was asked to create a quiz game show for the final round of “Know the tough stuff”. This is an an internal excellence programme Toyota runs for staff to enhance their product knowledge.

Shine, in collaboration with Inhouse Productions, came up with a game show design that will fit a 30 minute segment as part of the team briefing in early January. Sixteen contestants would group into four teams, competing for the title against one another in three rounds. Fastest finger first, multiple choice and finally a debate round.

Bringing the game to life

The system, built in Unity3D, incorporated multiple computer systems and Android tablets, all networked to seamlessly deliver the game play. The system reads button inputs from 16 buzzers, which also acts as multiple choice inputs during the second round. The system would then trigger realtime rendered graphics to corresponding screens, displaying the question, scores and other vital visual clues to the audience as the game progresses. 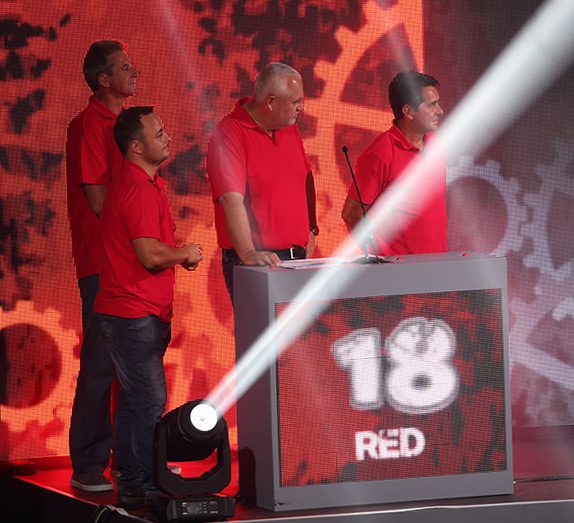 The presenter was furbished with an android tablet, keeping him in the loop and delivering the information needed at his fingertips in order to know who buzzed first, if they got the question right or wrong, and ultimately score and name information for each team.  During the final round, three more Android tablets came into play for the three judges who needed to score the outcome of each team’s debate.  They would then be able to choose a score for the player.